A “wave of heat” that was described at the time as “abnormal” and “unbearable”, affected Perth, Western Australia, from 1-4 January, 1896.

During the “exceedingly long spell of hot weather”, there were at least seven reported “deaths from sunstroke”, as well as the passing of four infants in a nearby town.

Perth experienced severe water shortages to the extent that the town’s supply had to be cut, entire crops were destroyed by heat, eucalyptus trees “suffered even more severely, being literally bleached white”, haystacks “burst into flames”, “raging” bushfires surrounded Perth for at least a week causing at least 66 tonnes of stock feed to burn.

PROJECT ABOUT TO REACH HALFWAY MILESTONE

Since our project launched on Zooniverse on 20 April 2021, more than 1,685 volunteers have digitised over 12,500 weather observations for Perth.

In just over six weeks, the project has almost reached the halfway point, with 49% of observations transcribed.

So far, all of Perth’s ‘Temperature’ and ‘Remarks’ observations from 1880 to 1900 have been transcribed by Zooniverse volunteers. While the data analysis will take time, we wanted to share some initial results.

Figure 1 below shows the preliminary, unadjusted daily maximum temperatures for Perth from 1880–1900. This graph shows the new temperature observations digitised by volunteers in blue and green. The Zooniverse project includes observations at the Perth Survey Office from 1880 to the end of 1884, and in 1885 the observation site was moved to the Perth Gardens site. The orange timeseries shows the observations available from the Bureau of Meteorology for the Perth Regional Office weather station.

Figure 1: This shows a timeseries of the daily maximum temperature observed each day. Overlap is shown for the period from 1897 onwards, which will be very useful to compare with existing Bureau of Meteorology records. Source: Climate History Australia.

You can see on the right side of the figure that there’s an overlap of the Perth Gardens Zooniverse record (in blue) with the BoM’s data (in orange) from 1897. This will help us to combine the record with BoM’s observations. We’d expect the Perth Gardens observations to be similar but not identical as they are from different locations – and we’re pleased to see that’s the case in the figure above.

The Zooniverse temperature observations transcribed by our volunteers reveal that this heatwave peaked at 112 °F (44.4 °C). This was reported in a long article in The West Australian newspaper from January 1896. Such long reports about the weather are rare in newspapers as paper and ink were limited resources at the time – so this must have been a remarkable heatwave. 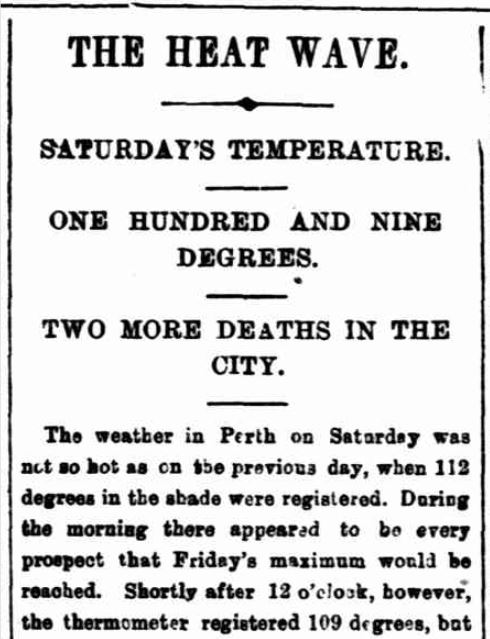 Hunt reported seven heat-related deaths in Perth, which was verified by reports in The West Australian newspaper. Over a number of issues of the daily newspaper, it was noted that “sickness has been considerably increased during the week, and the hospital is full of patients”. The newspaper details that the “victims” included a cab-driver, a waiter, a widow, an elderly woman, a horse groom, a gardener, and a labourer.

During a heatwave in Perth in  January 1896, there were seven heat-related deaths recorded. Source: Pg 116 of ‘Results of Rainfall Observations made in Western Australia’, by Commonwealth Meteorologist H. A. Hunt, National Library of Australia.

You can learn more about the kinds of conditions that lead to heatwaves in Perth in our recent blog Reconstructing past extremes using historical wind observations.

Helping us recover historical weather observations will improve our understanding of these kinds of extreme events. Documentary records provide detailed descriptions of past events, but the daily instrumental records targeted in this citizen science project provide valuable qualitative observations needed for data analysis.

WE NEED YOUR HELP TO TRANSCRIBE THE REMAINING DATA

To complete the Perth weather record, we still need your help completing the ‘Pressure’, ‘Attached Thermometer’ and ‘Wind direction’ workflows on Zooniverse.

Get started on our citizen science project, here: https://www.zooniverse.org/projects/caitlinhowlett/climate-history-australia