Our research has found that in June 1872, Perth experienced one of its most severe storms of the 19th century. Barometer observations made during this storm show that atmospheric pressure was at one of its lowest levels since 1830. The associated flooding from the storm was reported as one of the most severe floods since the Swan River colony was founded in 1829.

“The winter of 1872 will long be remembered on the west coast of Australia. We have had a remarkable succession of severe gales… in June we have had a storm so continuous and violent that the Fremantle jetty, which for 16 years had stood uninjured, was in great part destroyed”. – The Argus, a Melbourne newspaper, reporting on Perth’s big storm.

Our team recently published a new historical climate dataset for south-western Australia, covering the period 1830 to 1875.

The significance of this is that we have assembled one of the longest instrumental, daily climate records in the Southern Hemisphere, joining other long-term sites like Cape Town in South Africa where observations began in 1834.

A long record of nearly-continuous daily weather observations, taken multiple times a day at the same time and place, means that it is possible to examine the occurrence and impacts of historical weather extremes.

We’re currently running a citizen science project which will bridge a gap between the Swan River observations from our paper, with the start of the Bureau of Meteorology’s daily weather records in 1897, here: https://www.zooniverse.org/projects/caitlinhowlett/climate-history-australia. There’s more detail at the end of this article.

Identifying a severe storm in Perth in 1872

In the Swan River journals, we noticed observations in late-June in 1872 with remarkably low pressure, high rainfall and cold temperatures.

The barometer measurements were some of the lowest recorded observations in the record. And the remarks included comments indicative of an extensive stormy period that wreaked significant damages on the region. 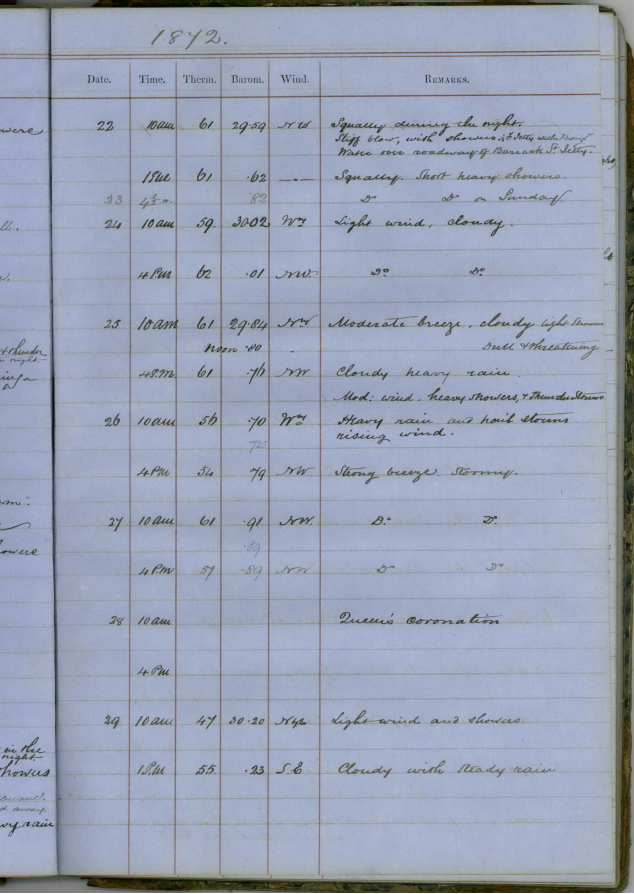 Remarks in the journals from 18 to 26 June 1872 included details such as; ‘Heavy rain and dark from 2pm’, ‘Gale blowing all day. Fremantle south jetty platform carried away… water in the river high’, ‘Water over roadway of Barrack St jetty’, and ‘heavy rain and hail storms, rising wind’.

We cross checked the dates with reconstructed historical weather charts known as the 20th Century Reanalysis (20CR), which is a tool to help see how atmospheric circulation patterns might have looked in the past. Conditions that cause heavy rain and flooding are when there’s a slow-moving low pressure system and a nearby big cold front that sticks around for a while.

A severe storm moving across southern Australia in June 1872

We were pleased to see that the daily weather conditions from the 20CR are comparable with the 1872 storm we identified in the Swan River journals. These kinds of verifications show that we can depend on the daily observations to accurately represent the conditions of extreme weather at the time. For more examples of this, our paper verified two other case studies from 1868 – a winter storm and a summer heatwave.

perth floods in the Newspapers, June 1872

To further cross-examine the observations, we checked to see if the storm and flooding noted in the Swan River journals was also reported in the newspapers of the time. The National Library of Australia’s Trove historical newspaper database is an important resource to help verify the societal impacts of the extreme weather in our research.

There were numerous published articles, describing how Perth and its surrounds “were deeply submerged for some days”, “all the lowlands and alluvial flats are under water”, and that “the water was about a mile wide… Traffic over Barker’s Bridge was stopped… Several families on the Bridge Estate, west of Guildford, were forced to vacate their dwellings”.

One account detailed how a chimney was “struck by the wind and fell with a terrific crash”, bursting through the roof and levelling a bed with a sleeping woman and child (who were fortunately not injured).

The Perth Gazette and Western Australian Times reported that the floodwater caused  “serious havoc” including damage to bridges, jetties, buildings and agriculture. “The water rose 2 feet inside the houses” and “much livestock has been lost and orchards have suffered considerable damage”.

The storms and flooding was also widespread across inland Perth which was “flooded for miles”, impacting the construction of the  Overland Telegraph line, bringing news that the “land is so boggy” that it will cause farm animals to perish, and likely that wheat crops “shall be afflicted with red rust”.

The Herald from 20 July 1872 also commented on the remarkably low barometer observation and the strong W and NW winds; “I have never observed on this coast the barometer so low as it was in those late W and NW gales”. So this was another validation of the low barometer readings and wind direction written into the Swan River journals. 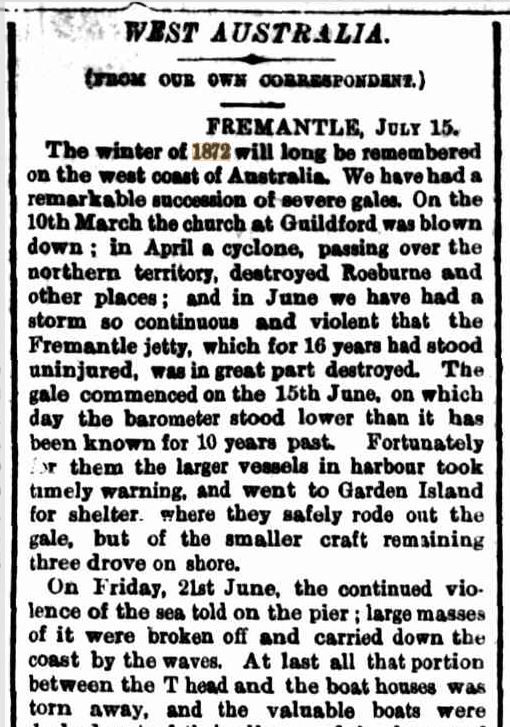 All of the major newspapers at the time lamented the loss of the Fremantle South jetty to the storm, including The Fremantle Herald, The Inquirer and Commercial News on 3rd July, and the Perth Gazette and Western Australian Times on 12 July 1872, which said “we pay our tribute of respect to a departed friend – the Fremantle Jetty… It’s gone, and had the hurricane that swept it away lasted a few hours longer we should have had to record the loss of the old family residence.” 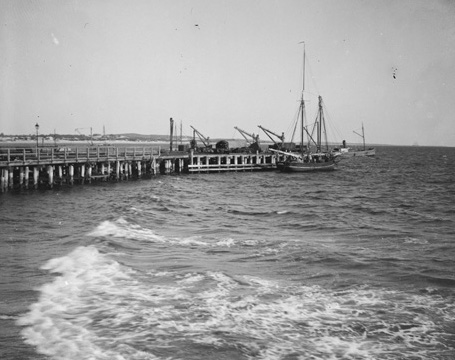 The South Fremantle jetty extended south from Anglesea Point. It was completed around 1854 before being destroyed in the 1872 storm. It was later rebuilt before this photo was taken sometime in the 1890s, but was eventually dismantled in 1929. The site today has been redeveloped into a harbour and is a popular tourist destination known as Fishing Boat Harbour. Source: State Library of Western Australia BA1557/74.

More broadly, our Trove research indicates that June 1872 was one of the most severe floods since the Swan River colony was founded. For example, although there were many floods in Perth between 1872 and 1904, an official Government weather record dated August 6, 1904, stated that “not since 1872, when there was a record flood in the valleys of the Helena and the Swan, has there been such a serious inundation as a result of heavy rains”. In 1946, The West Australian said; “Of the 34 floods which occurred during the ensuing hundred years, two of the worst appear to have been those of 1862 and 1872.” And The Perth Gazette and Western Australian Times reported that; “The rise of the Helena River was 2ft. 3in. higher than the great flood of 1862”.

Our research has extended Perth’s daily weather record back to 1830. However, there are gaps in the near-continuous coverage between 1876 and 1897. We are now looking for volunteers to help target this gap by recovering daily weather observations for the 1880–1900 period.

The task for citizen scientists is to transcribe weather observations from the Perth Survey Office from 1880 to 1884, and the Perth Botanical Gardens from 1885 to 1900. With your help, we can join the Swan River historical records with the modern Bureau of Meteorology records.