Learn more about the Royal Engineers who took weather records in Adelaide from 1843 to 1856. 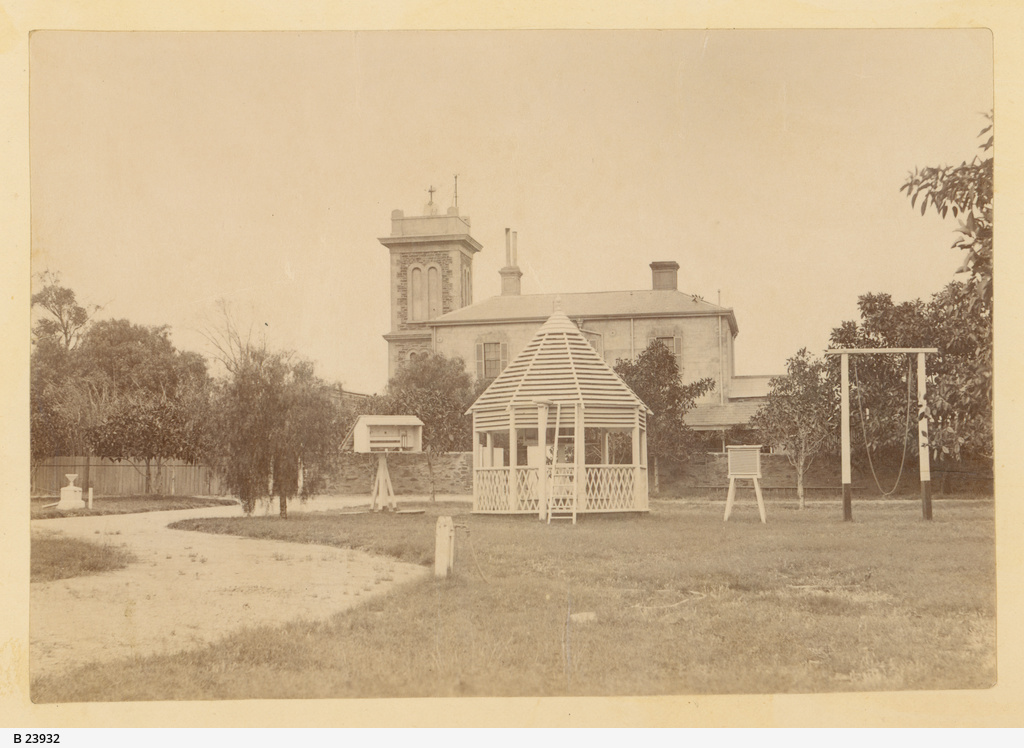 The weather observation site at the Adelaide Observatory in the 1880s; showing a thermometer house (middle gazebo-like structure), a Glaisher stand (rectangular raised box on the left) which was the main way temperature observations were taken prior to 1908, and a Stevenson screen (smaller square box on the right) which is the standardised, modern way that temperature observations are measured today. Source:  B-23932 State Library of South Australia.

In the year 1843, the ‘Great March Comet’ with its extremely long tail was splendidly visible from even the daytime skies of the Southern Hemisphere. However in Adelaide, South Australia, there was another reason to look skyward for what in modern times might seem like an unlikely group – the Royal Engineers.

In the early 1830’s, the British Armed Forces Corps of Royal Engineers became interested in capturing weather data. The 19th century military was a vital component in shaping meteorology as we know it today. These weather diaries are of significant value for scientists, historians and other researchers.

Why did the Royal Engineers take weather observations?

Many of the colonial outposts were in the hurricane corridor, extending from the Caribbean northwards. This means they experienced the effects that extreme weather had on colonial infrastructure. So it was by necessity that these engineers needed to learn more about weather patterns.

Engineer officers usually had little or no choice in their posting and regularly played a variety of roles – military commanders, governors and officials, builders of military works, and staff of public works departments.

The Survey Department in Adelaide was part of a global colonial network of similar units created by the REs. They were first sent to Australia in 1835 to build military garrisons, convict establishments and public works.

In South Australia, the REs ran the early Survey Office and the Adelaide weather record was started under Edward Charles Frome, Captain of the Royal Engineers and the 3rd Surveyor General of South Australia from 1839 to 1849. Next, was Sir Arthur Henry Freeling from 1849 to 1861. Frome’s records were entirely complete, however the record under Sir Freeling currently has two small gaps from March 1851 to February 1852, and January and February 1854 – which the team at Climate History Australia are currently searching for. 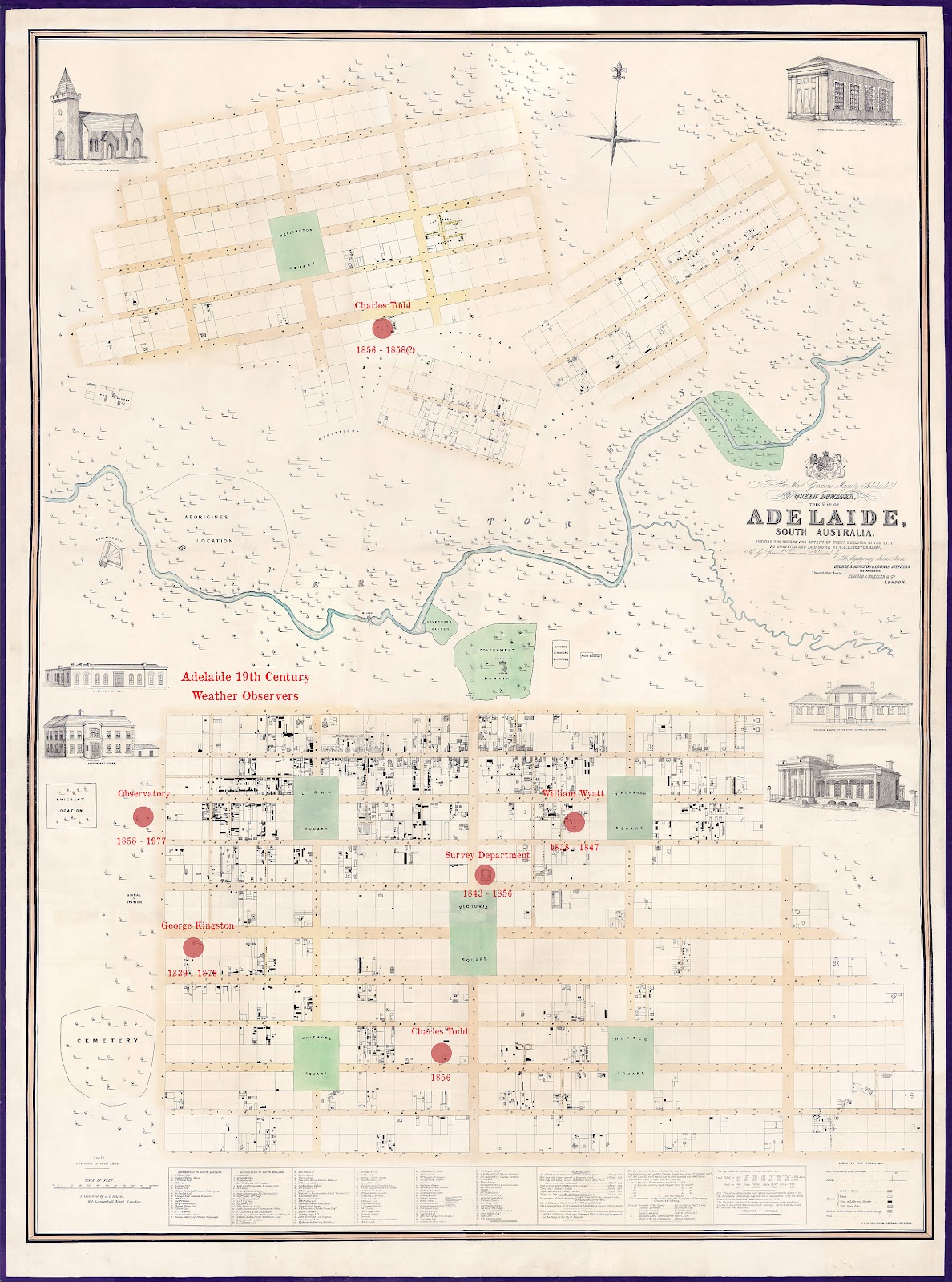 [Click to Zoom In] A map of the early city of Adelaide, showing the earliest meteorological observation sites, starting in 1838. Source: Original image is the Kingston Map, 1842, from the State Library of South Australia. Adapted by the Australian Meteorological Association, http://www.ameta.org.au

Earlier, there were also weather diaries kept in Adelaide by William Wyatt from January 1838 to December 1847, which are some of the earliest daily weather observations for Australia. These diaries have been transcribed, analysed and the results published by the team at Climate History Australia earlier this year. Also, George Strickland Kingston recorded rainfall from 1839 to 1880.

In 1856, Charles Todd arrived in Adelaide; the first person to be officially sent out to the Australian colonies as an official ‘meteorological observer’. He eventually took over from the RE observers, and in the next 17 years his work in meteorology, electrical engineering and telegraphy was key to establishing the world’s first integrated continental weather observation system. As a result, Australia was producing our first continental synoptic charts in 1879 (which included New Zealand), thanks to Todd’s Overland telegraph developed in 1872, the trans-Tasman telegraph in 1876, and the telegraph to Western Australia in 1877. Not even the Canadians had their Trans-Canada telegraph until 1886. 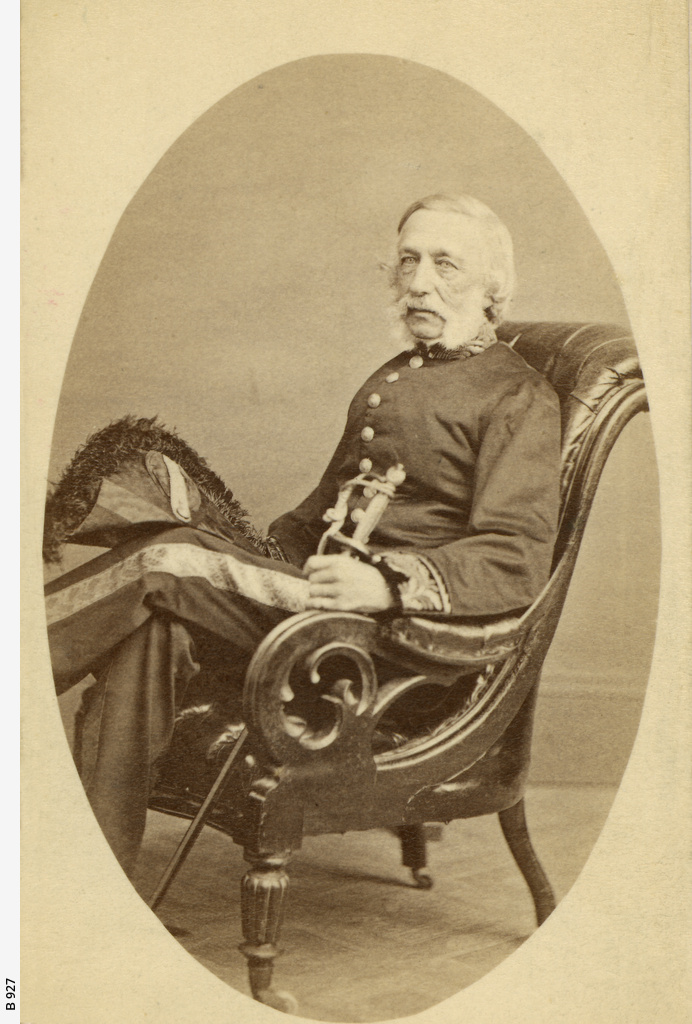 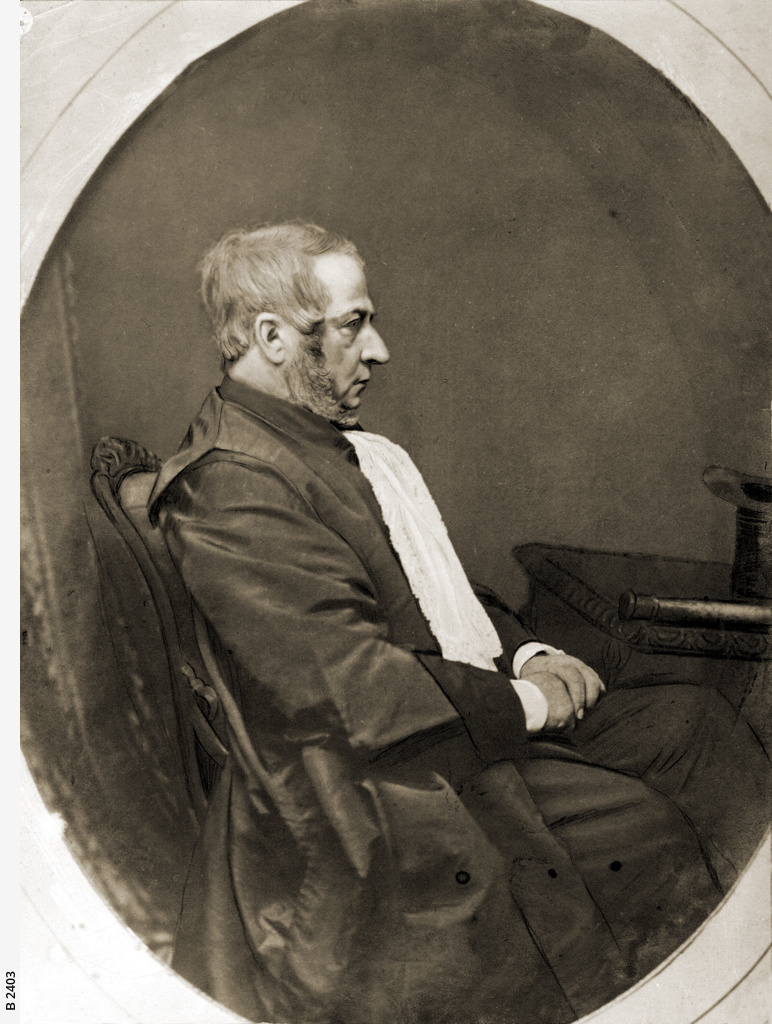 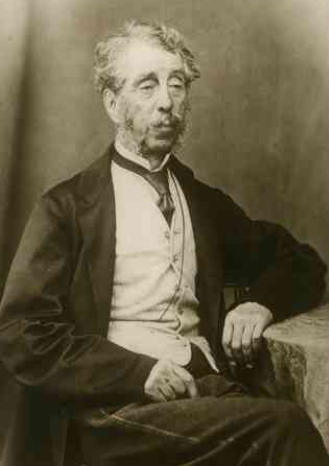 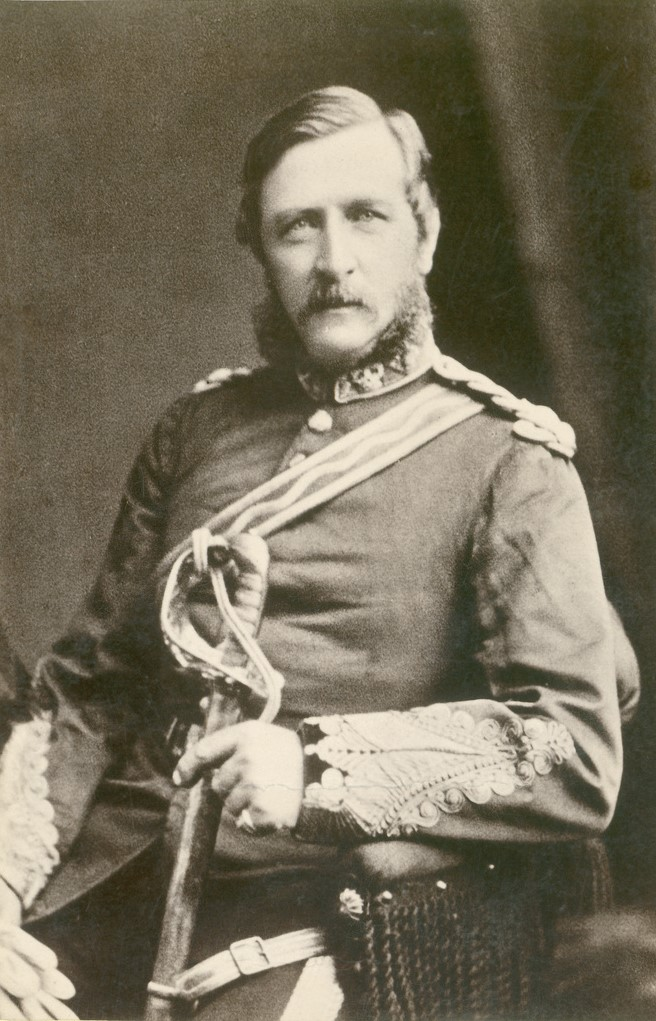 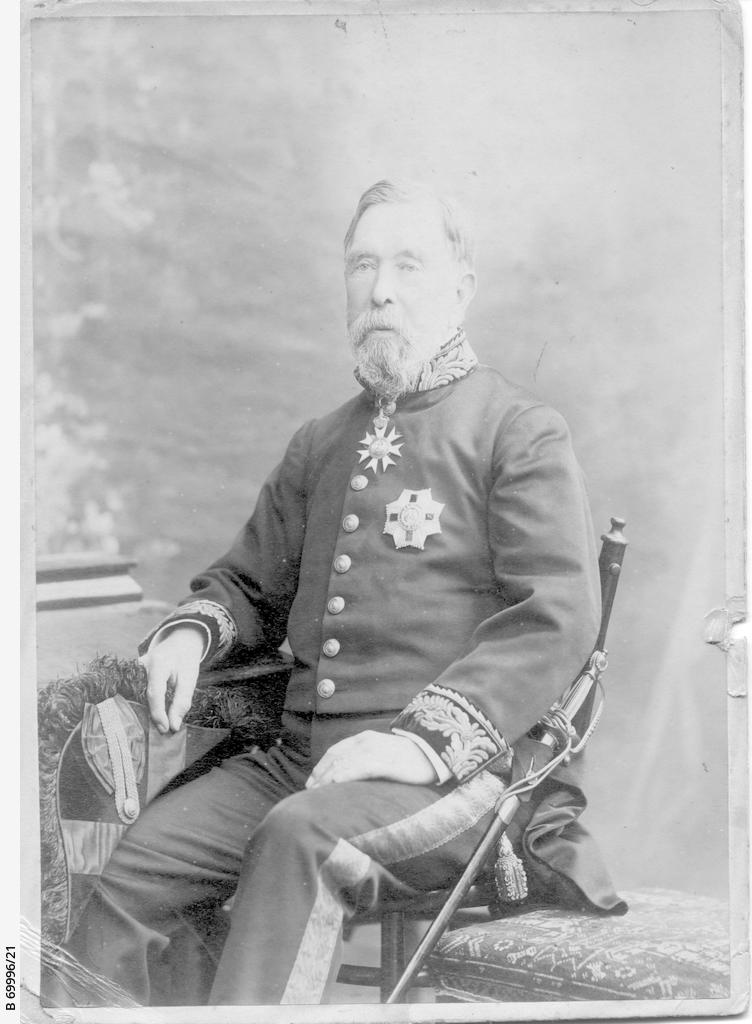 The first people to keep written daily diaries of the weather in Adelaide, South Australia. Pictured left to right: Wyatt took daily observations from 1838 to 1847. Kingston recorded rainfall from 1839 to 1880. Frome was responsible for Survey Department weather records from 1839 to 1849, and he was succeeded by Freeling from 1849 to 1861. And, Todd took daily weather records from 1856 and official records at the observatory from 1860 until 1908. Source (all):  State Library of South Australia.

What else Is known about the Adelaide Survey Department weather records?

There are 12 years of RE journals from 1843 to 1851, recently uncovered in the National Archives of Australia, which will be the focus of a citizen science project launching in September 2020.

It’s important to note that the Adelaide record also shows interesting developments over time. This helps explain why the Adelaide Survey Department diaries are not always so well laid out as records from other locations in Australia, or even globally (see a complete record on St. John’s Newfoundland, or keep an eye out for Climate History Australia’s project covering 19th century Perth later this year).

For example, in 1852, the RE Corps established a global standard. As such, the Adelaide record changes in form, clarity and the times that observations were taken; reflecting these new standards out of London.

Also, given that all the monthly tables from 1843 to 1859 are hand-drawn, there are slight differences in the daily measurements recorded.

We are fortunate to have excellent detail on the location that the observations were taken. This is very helpful for climate researchers, as knowing the elevation helps to convert pressure measurements into mean sea level pressure, facilitating an easier comparison with modern data sources. 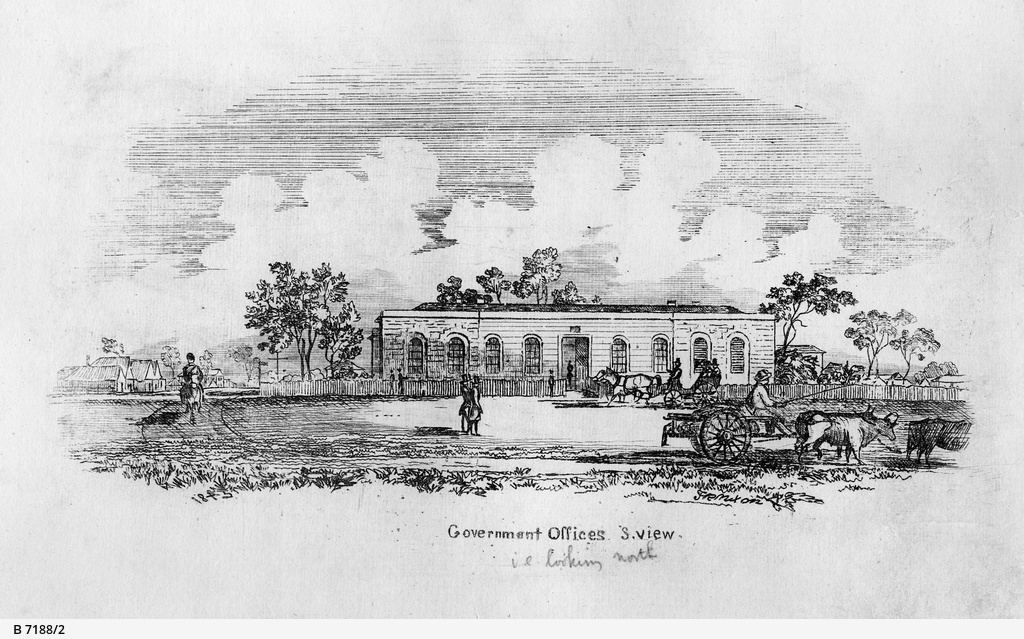 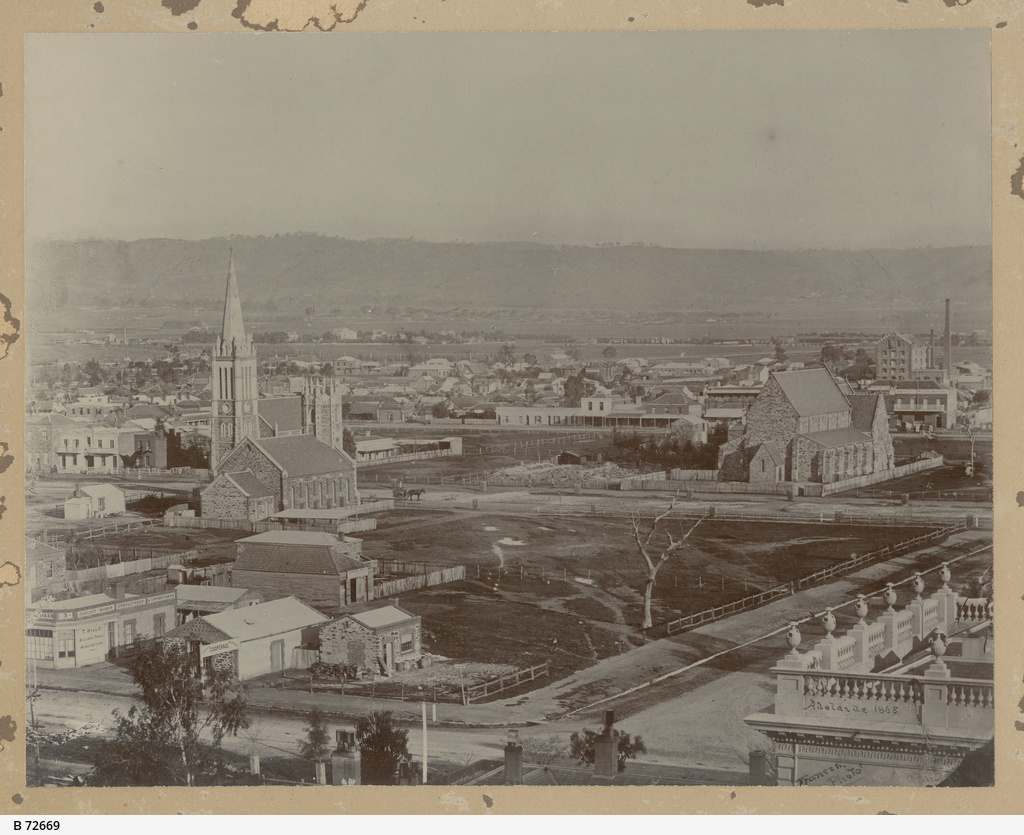 The Government Offices on King William St, Adelaide, in 1845 (left/top), and a view from the roof of the same building after a rebuild in 1865 (right/bottom). This is the most likely building where these Adelaide Survey Department observations were taken – probably from an inner courtyard surrounded by four sides, as it has kept in its modern, much larger form as Adelaide’s Adina Hotel today. Source (both images): State Library of South Australia.

How can I help?

Historical weather records are important for understanding Australia’s past climate. Daily weather observations help provide a level of detail that can’t be gleaned from other long-term climate records. The diaries kept by these early settlers will help uncover new and valuable insights into our nation’s natural climate variability and how people were impacted by extreme weather events.

Citizen scientists are integral to helping read and transcribe early weather records. To volunteer on the recently uncovered RE journals from Adelaide, sign up here. 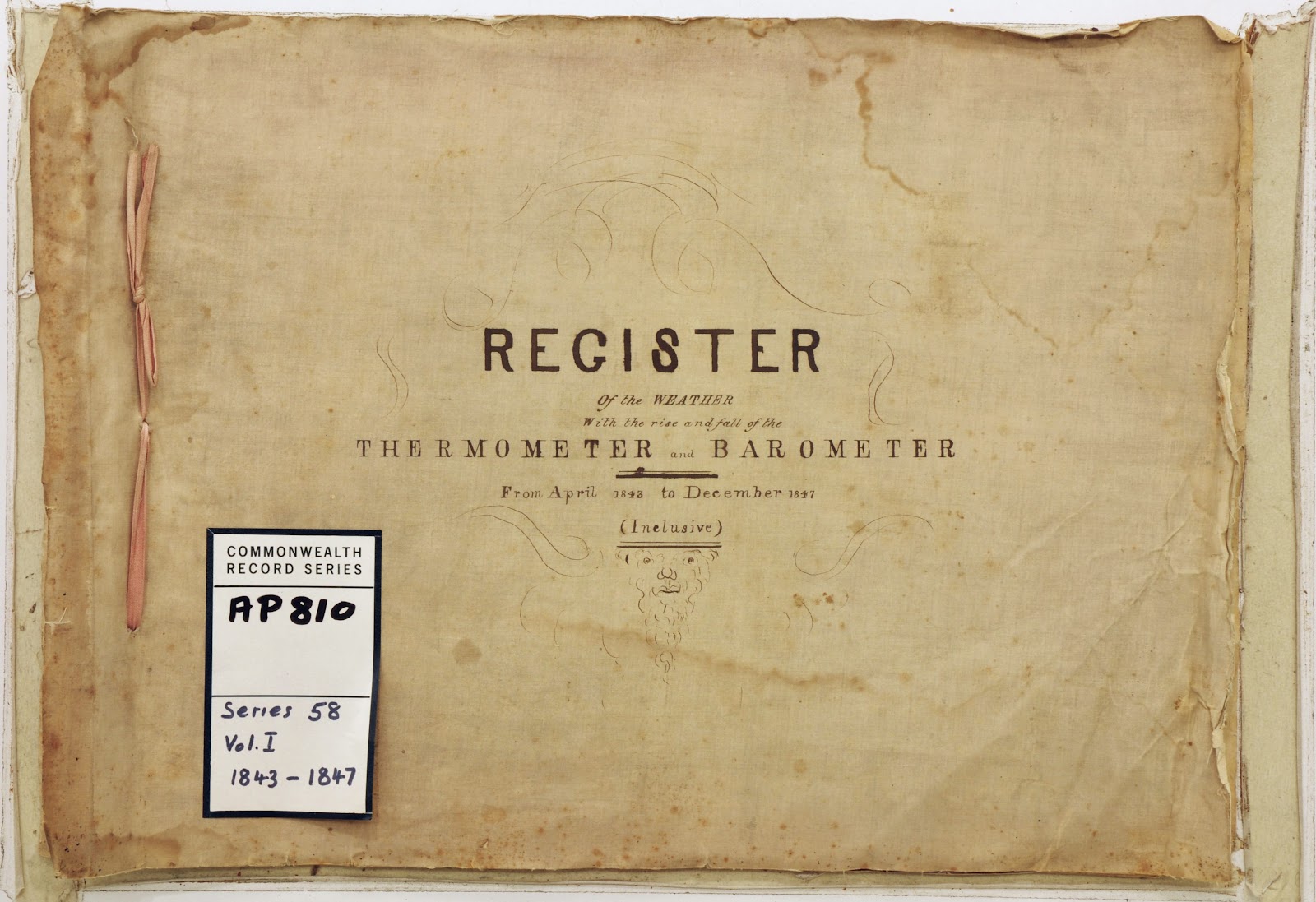 The cover of one of the Adelaide Surveyor General’s weather folios, starting in 1843. A citizen science transcription project will be launched in early-September to help digitise these records. Source: National Archives of Australia.